Since its inception, the SA Department of Agriculture/PIRSA has played a key role in fostering the introduction of new horticultural crops and development of their associated industries. During the 1800s and early 1900s, new crop development was focused primarily on food crops that would be of significant value to the health and well being of the South Australian community.

Through the 1910s and 1920s almonds, olives and glasshouse tomatoes were in their infancy and identified as potential new crops or industries. By the 1950s they had grown to become main stream horticulture industries in South Australia.

Immigrants settling in Australia after WW2 and the Vietnam War brought interest in and a host of new fruit and vegetable crops.

The establishment of the Government Fruit and Vegetable Garden Working Party by the South Australian government in 1974 was a watershed for new crop development. It created a high level focus for developing and expanding new fruit and vegetable crops by the Department of Agriculture/PISA/PIRSA. It created momentum for new crop research and development programs for the next 20 years.

Establishment of the Government Fruit and Vegetable Garden Working Party

During the 1970s, Premier Don Dunstan was keen to see diversification of the restaurant industry and development of a 'café culture' in Adelaide, similar to the one he had experienced during his travels in Europe and Asia. He initiated a program to expand the range of new foods served in Adelaide restaurants, and encourage production of a range of new vegetables, fruits, herbs and nuts required. This Working Party was formed by the Premier in March 1974 and ran for 6 years until 1980.

Under guidance of the Government Fruit and Vegetable Garden Working Party, this alternate crops program harnessed staff and resources from the following SA Government agencies:

It also linked with national agencies such as CSIRO, and later influenced organisations such as the Rural Industries Research & Development Corporation (RIRDC).

Role of the Government Fruit and Vegetable Garden Working Party

The key purpose of the Working Party was to supply various new vegetables, fruits, herbs and nuts to restaurants owned and leased by the Government (Henry Ayers House, Festival Theatre Restaurant and Waterfall Gully Restaurant), and later to private restaurants. It was proposed that these alternate crops would be produced by the Department of Correctional Services and be distributed to restaurants by the State Supply Department.

The Government Fruit and Vegetable Garden Working Party focused on a host of fruit and vegetable crops that were popular in Europe and Asia, but were not being commonly grown in Australia. It used the following steps:

Of particular importance were the visits from international chefs, and development of chef training programs at the new Department of Further Education School of Food and Catering Services facility established at Regency Park (under the management of Mr Graham Latham). Young chefs being trained at this facility were supplied with these new fruit and vegetable products to gain experience in how they could be used in innovative new menus.

Information generated from growing trials was used to produce a series of fact sheets about a range of new vegetable crops. These were aimed predominately at the home garden audience (in part to stimulate consumer interest) and distributed through the Department of Agriculture’s publication system.

To provide suitable climatic zones for new crop evaluation, trials were conducted at the Department of Agriculture’s Northfield, Loxton and Lenswood Research Centres. Some commercial assessment trials were also located on grower properties in the Adelaide Hills.

A wide array of Department of Agriculture staff with experience in horticulture crops were involved in assembling information and establishing trials to develop technical information about the new crops.

The Department of Agriculture employed a Technical Officer (Mr Geoff Lomman) who was dedicated to evaluating many of new vegetable and herb crops. Support was provided by a range of other horticultural research officers and advisers.

Mr Dick Henderson and Ms Shirley Sylvia were employed to assist with development of new vegetable crops in the Riverland. In addition, Mr Farnell Hobman was also employed as a Senior Research Officer New Crops at Loxton Research Centre to focus on perennial crops. A range of other research staff assisted with trial plantings and development new industries in the Riverland and other districts. 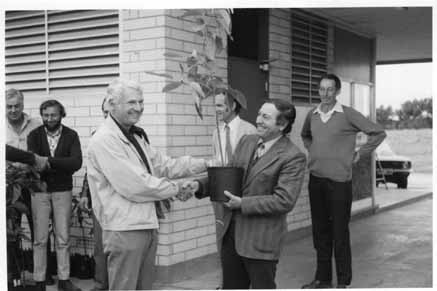 While Premier Dunstan was keen for the Department of Correctional Services to undertake commercial production of these new crops to supply restaurants, focus was ultimately moved to encouraging the commercial growers to develop production.

By 1980, the new horticulture crops program demonstrated that many of the new vegetable crops could be successfully grown in various districts of South Australia. It successfully fostered interest from a number of smaller growers and provided technical support to develop commercial production. The project forged marketing links between growers, restaurants and consumers interested in these new horticulture products.

With increasing demand coming from the restaurant and catering industry, production of many of these crops began to expand. Today many of the fruit and vegetable crops evaluated in the new horticulture crops program of the 1970s are commonly available in supermarkets and retailers (eg snow peas, peppers, cherry tomatoes, new lettuces, seed sprouts, zucchini).

A key part of this visionary strategy was proving the viability of a wide range of new fruit, vegetable and food crops not commonly grown in Australia at that time, and fostering their commercial and economic production.

Initially crops were grouped according to their suitability under SA’s climatic zones. Crops requiring a tropical climate were deemed unsuitable and were discounted (eg paw paw and lychees) because of frost. Some with marginal suitability to SA’s climate could be grown with careful selection of production sites (eg West Indian limes, feijoas). Some new crops were already under evaluation by the Department of Agriculture at this time (eg pistachio, avocado).

After some initial screening, more than 40 different fruit, vegetable, herb and nut crops not in common production at that time were assessed. Some were specialty new varieties, while others were for specific frozen, oil, dehydrated or processed food products. This included:

The most significant of these was the Murray Lands Alternative Perennial Crops Working Party which was established in 1978 and operated until the mid 1980s. Its objective was to “provide a forum to examine the potential for alternative perennial crops in the Murray Lands Region”. Terms of reference for this working party were:

Under guidance of this Working Party, New Crop Development Officer, Mr Farnell Hobman conducted a series of feasibility studies on pistachio, walnut, olives, carob, persimmons production in the Riverland and other districts. Information from these feasibility studies were extended to a range of growers interested in these new crops.

As part of assessing new crop opportunities, a series of desktop evaluations (of production and market feasibility) were commenced. Following are some examples of the desktop studies undertaken during and shortly after the life of the Government Fruit and Vegetable Garden Working Party. :

New crop development into the 1990s

After cessation of the Government Fruit and Vegetable Garden Working Party, work continued on a series of new horticultural crop initiatives, and these projects generated their own momentum. A number of these were supported with federal funding from Rural Industries Research and Development Corporation (RIRDC specialises in fostering new crop development).

Following is a brief description of the most significant new horticultural crop development projects that emerged in the 1990s.

Development of garlic production was seen as an important priority, and a program to facilitate development of a garlic industry in the Riverland was established at Loxton Research Centre. Lead by Vegetable Adviser Mr Dick Henderson (previously a County Farm Vegetable Adviser from California) with support from Ms Shirley Sylvia, this project evaluated garlic varieties and selected (and multiplied) virus free clones for use by the industry.

Further information about the Australian garlic industry can be obtained from Australian Garlic Industry Association.

Watercress is a long established traditional salad crop in the UK, Europe and other parts of the world, but is not well known in Australia. Consumers who have experienced it overseas enjoy it peppery flavor in salads, sandwiches and a variety of cooked dishes.

A joint project between PIRSA, RIRDC and Holla-Fresh Pty Ltd (Millicent) in 2006 (coordinated by John Fennell) assembled a wide array of information about watercress production, its potential health benefits, and opportunities for greater use in the Australian diet. Read the 73 page report Potential for Watercress Production in Australia, written by John Fennell.

Holla-Fresh is now a major commercial producer of watercress.

During the 1990s commercial production of several traditional horticulture crops was developed in the South East with a view of utilising the irrigation potential in this district (this included cherries, lemons and walnuts). Over the past 20 years, trials have also been conducted with essential oils (peppermint, spearmint), pyrethrum and dried culinary beans. District Horticultural Adviser, Mr Mark Bartetzko has played a key role in fostering and coordinating these trials.

This program demonstrated that climate, soils, irrigation water and grower skills were suitable for development of a pyrethrum industry in the South East.

However by 2001 when the program was nearing completion, world pyrethrum demand declined. Significant investment was needed for a preliminary processing facility near Mt Gambier, and transport costs to move raw product to Ulverstone, Tasmania via Portland were high. Ultimately BRA decided not to proceed with development of a pyrethrum industry in the South East.

Subsequently during another period of high world pyrethrum demand, BRA established production into the Ballarat district in 2008. By 2010, the area of pyrethrum production around Ballarat had expanded to over 500 ha, and BRA had commenced development of a first stage post harvest processing facility.

During the late 1980s, there was strong interest in establishing a dried culinary bean industry in the South East of SA. This involved production of a range of bean types such as Red Kidney, Black Eye, Adzuki, Navy and Borlotti. PIRSA established a series of demonstration trials on grower properties for 3 years. These proved the suitability of the district for irrigated summer production of these beans.

However, it was difficult for high cost irrigated production of culinary beans to compete with lower cost broadacre summer rainfall production in south east Queensland. A lack of strong commercial market support resulted in declining interest, and the South East culinary bean industry failed to develop.

During the 1920s, experimental plots of peppermint and spearmint demonstrated the suitability of the South East district for irrigated production of these crops for oil extraction. These trials demonstrated that high quality peppermint and spearmint oil crops could be grown in the South East. However producing these crops profitably has always been an issue.

A spike in world prices for essential oil crops during the late 1980s reignited interest in these crops. Despite a series of minor trials that confirmed suitability of the district’s climate, soils and irrigation systems, the industry did not develop. The high cost of oil distillation, price competitiveness with natural rainfall production in regions like northern USA (e.g. Wisconsin), and long term storage of oil by overseas producers made it difficult for South East growers to be cost competitive.

During the late 1990s there was considerable interest in developing a range of Australian native food crops. Commercial companies were beginning to use these crops in a range of simmer sauces, jams, chutneys and other processed foods. However there was a lack of commercial growers and technical information.

The Rural Industries Research & Development Corporation (RIRDC) funded a national project that produced a 6 monthly Australian New Crops Newsletter. The first edition of this newsletter was published in January 1994.

Further information about development of new crops in Australia is available at AgriFutures Australia.

This article was prepared by Barry Philp with support from Don Plowman. June 2014.