We have recently received unusually large reports of several caterpillar species. Weed web moth caterpillars have been reported at Streaky Bay on medic, and more widely, across the northern Eyre Peninsula in Cleve, Buckleboo, Kimba and Waddikke. Native budworm (PDF 938.8 KB) (Helicoverpa punctigera) has been reported on volunteer peas, cereal and canola at Wudinna, Minnipa and Streaky Bay, and on medic at Kimba. Cutworm (PDF 897.3 KB) (Agrotis sp.) caterpillars have been reported at Wudinna in canola, and particularly active on white sandy soil and at Kimba. We have also received reports notable moth flights of multiple species at Bordertown, Naracoorte (also see PestFacts SA Issue 2), Streaky Bay and Sherlock.

Whilst the exact cause for this unusual moth and caterpillar activity is unknown, it is likely due to a combination of early rainfall in some areas (possibly on native vegetation, and likely far away) triggering insect development, and temperatures still high enough for autumn migrations. Caterpillars, and other pests such as aphids, may transfer from the green bridge into vulnerable emerging crops if the green bridge isn’t destroyed for at least two weeks before crop emergence. Caterpillars and aphids need a green host to feed on or they will starve and die. This includes moth eggs, as they do not go dormant.

At times, caterpillars can be challenging to correctly identify due to their similarities in appearance. PestFacts SA provides free identification to subscribers – for more information on the best way to send specimens or tips on taking photos, see PestFacts SA Issue 2. If you suspect a caterpillar is fall armyworm (FAW) please contact Biosecurity SA immediately by calling the Emergency Plant Pest hotline (1800 084 881), or submitting an online plant pest report form.

SARDI will be continuing the helicoverpa moth trapping network again this year. If you’d like to join our network of trappers, and can commit to weekly cheeking of pheromone-based bucket/funnel traps, please register your interest via email: rebecca.hamdorf@sa.gov.au.

Leafhoppers (jassids) have been reported on canola at Whyte-Yarcowie and Eudunda. Numbers in both areas are reported as high, and they are visibly jumping off plants when disturbed. The movement and colour can look similar to lucerne flea, but they are elongate not globular and larger. Some small feeding damage from the leafhoppers has been recorded as whitish necrotic spots on the cotyledons.

Leafhopper activity is favoured by warming conditions, so cooling temperatures means they are unlikely to persist for much longer. Please report any occurrences to the PestFacts SA team so we can get a better understanding of the spread of leafhoppers and how they react to this season.

Over the last few weeks, we have received the first reports of some Russian wheat aphid (PDF 1.0 MB) (Diuraphis noxia/’RWA’)activity near Loxton East, White-Whyte-Yarcowie, east of Eudunda (mid north) and at Myponga Hills on perennial ryegrass.

RWA summer survival was expected to be extremely low in most areas following the dry summer conditions (see PestFacts Southern Webinar for a more detailed update). We are still assessing the presence of RWA on grasses (green bridge sampling) as part of the Grains Research & Development Corporation’s (GRDC) investment ‘Russian Wheat Aphid Risk Assessment and Regional Thresholds’. Cesar and SARDI are developing a model to predict RWA summer survival based on these observations. Early outputs are predicting RWA may have survived in low numbers in some area (Fig 1.), so we need your input to validate the model.

Please report any sightings of RWA to the Pestfacts teams: SA and south-eastern.

The PestFacts SA always wants to know what invertebrate you are finding in your crops and pastures, whether it is a pest, beneficial or unknown. We would also like reports of the usual insects that are seen every season. Please send your reports or identification requests via the PestFacts Map online report form. Alternatively, please contact: 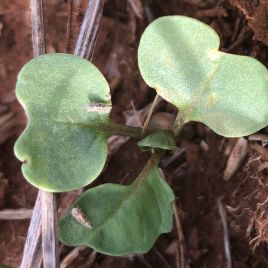 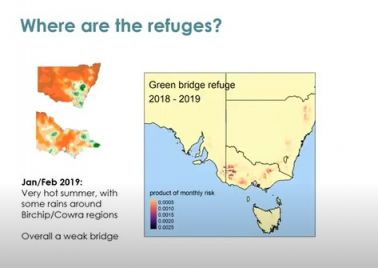