In the beginning before SAGIT

There had been a National Statutory Wheat levy in place for some time and in 1982 it was agreed to lift this to 30 cents per tonne. NSW at this time was paying $1/tonne.

In 1981 there was substantial debate around the need to a State levy, given the view that R&D was being severely hampered by a lack of funds. The major concerns were around cereal breeding and disease (of which a major one was Rhizoctonia)

This debate was led by The Grains Section Executive of the UF&S. It is interesting to note who was on the Executive at that time: The debate included many issues which are still relevant today, such as:

The Grains Research Trust Funds Act was proclaimed in 1982.

In the late 1980s, under the drive of Hon John Kerin Federal Minister for Primary Industry and Energy, discussions were held with the State grower bodies, in particular the Wheat and Barley Research Committees, regards the establishment of a national R&D entity. This would provide a national coordinated approach and be funded by a compulsory grower levy with matching support from the Commonwealth. It would replace the voluntary funds in the States.

In a letter dated 20 March 1990 to the then Chair of the SA Wheat Research Council, Don Blesing, John Kerin foreshadowed the imminent formation of the Grains Research and Development Council (GRDC).

The GRDC was formed under the Primary Industry and Energy Research and Development (PIERD) Act 1989 (Commonweath) and commenced operation in September 1990.

It is interesting to note that the PIERD Act does not allow GRDC to lobby on behalf of industry. This was seen as the role of the grower (and other industry) bodies, and was also not favoured by the Commonwealth.

In a letter of 8 June 1990 to Lynn Arnold, then SA Minister of Agriculture, John Kerin agreed to the return to SA of the wheat and barley levies collected under the voluntary arrangement since 1983, provided that they were spent on wheat and barley research.

Along with this, a proposal was developed by the then United Farmers and Stockowners, largely with the leadership and foresight of Ken Schaefer, Colin Rowe and Malcolm Sargent to establish a Trust to manage the voluntary levy funds returned by the Commonwealth.

This was agreed by Minister Arnold and a Trust Deed established under the Regulations under the Wheat Marketing Act.

The Trust would responsible for the SA Grain Industry Trust Fund and be managed by three Trustees appointed by growers (one of whom would be Chair) and one appointed by the Minister.

The rationale behind the Fund, and the continued application of a voluntary levy, was to provide support for work with specific benefit to SA growers.

The Trustees would manage the Fund for "the benefit and advancement of the grain industry in South Australia through research and development into the growing, harvesting, storage, processing and marketing of grain, and for the dissemination of technical information to the grain industry".

SA is unique and the envy of the other States in that they don’t have such an arrangement.

The voluntary levy only applied to wheat and barley until about 2000 but is now collected on all grains grown in SA.

The levy is calculated on a per tonne basis, as compared with an ad valorum or farm gate value as is the case with GRDC. The latter does provide for some counter balancing of production and price impacts, but is far more difficult to collect, especially at State level.

In SA the levy is collected on behalf of growers from purchasers of grain by Primary Industries and Resources SA, under powers provided under the Wheat Marketing Act.

It is interesting to note that at the time the Trust was formed, negotiations occurred with UF&S with regards SAGIT joining in the purchase of the premises at 122 Frome Street, Adelaide, which were for sale by Mortgagee in Possession for $3.5M. The Trustees declined, the building was purchased and became the home of SAFF, and was later sold.

An operational review into SAGIT was instigated by SAFF Grains Council in 2003 and done by Maurie Vaast of GSI Consulting. The recommendations included setting up formal processes and documentation to reflect the expectations of current Corporate Governance. Roles were defined, tenders called for services, and Service Level Agreements were established.

Thomas Project Services took over the Executive Services role from SAFF in 2005.

SAGIT is a not for profit entity and is therefore not subject to Income Tax.

SAGIT generates income from three main sources, the levy on grains, interest and dividends from investments, and from royalties.

Given the nature of the projects and the difficulty and cost of capturing IP value, the returns from royalties have been small, but not insignificant. For example, royalty revenue from the 2010 crop was about $250K.

SAGIT Trustees manage the funds through a 10 year forward budget which is reviewed annually. This is used to recommend the level of levy collection and expenditure on projects.

This has been by far the greatest SAGIT investment with over $1.7M on projects and a loan of $200K to support the establishment of the Soil and Plant Diagnosis Facility in SARDI. It is fair to say that without SAGIT’s investment SARDI (and SA) would not enjoy the lead role in root disease pathology which they do today.

The work has not only increased our knowledge of plant root diseases but provided an in-field Root Disease Testing Service (RDTS), and provided much of the basis for advice on control measures. It has also provided a valuable support service for consultants advising farmers and other research teams and plant breeders. Attempts to commercialise the service with Bayer (Predicta B) were not successful.

AS well as research support, SAGIT has led the way in funding the Root Diseases Handbook and the associated training for farmers, consultants and other scientists.

The work has now extended beyond disease management per se to such things as using DNA measures to assess root architecture and its implications for farming practices and plant breeding based on the need for more robust root systems to cope with our difficult environment.

SAGIT has also invested heavily in research into Rhizoctonia which is still the major root disease troubling SA farmers. This work continues. 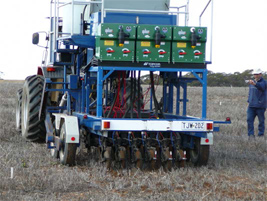 The use of double haploids provides for more rapid development of new varieties. SARDI has played a lead role with substantial investment by SAGIT ($743K) with the approach now being an important part of variety development. The work continues with co support from GRDC to reduce the costs and increase the use of this material by plant breeders.

SAGIT has been a strong supporter of groups to support new technologies including major investments in SANTFA ($305K), SPAA ($272K) and HART ($100k+). These groups have provided valuable service to the farming community and are now more self-supporting.

Snail management became an important grain quality/delivery issue especially with the adoption of no till and cessation of stubble burning. SAGIT supported (about $270K) a comprehensive research and extension program with the Bash’Em, Burn’Em, Bait’Em control measures still being widely used today. The Snail Control Guide – an example of integrated management

Break crops have been an important component of farm rotations for many years, in terms of disease management, weed management, crop nutrition (especially nitrogen), and more recently the conservation of moisture for use by the following crop. They are an integral part of modern no till systems and are likely to increase in importance. Yet in many areas, especially those with unreliable rainfall there is still the need for reliable break crops. Peas: An important component in many rotations, peas provide a disease and weed break as well as being a valuable source of nitrogen. Pea diseases, especially black spot, has been a major issue for which control measures are now available through SAGIT funded work.

Black spot on peas. SAGIT funded work has enabled this disease to be controlled Fertiliser costs are a major component of most farm programs and are likely to remain so. Hence SAGIT funds substantial work on new and improved approaches such as use of fluid and other forms of phosphate fertilisers; fertiliser placement; improved methods of assessing soil nutrients; and the optimal levels of fertiliser required, especially after droughts.

The Sowing Guide which uses GRDC funded National Variety Trial and other data to provide recommendations on varieties of all grain crops in the various districts is one of SAGIT’s most popular projects. It is now a joint venture between SARDI, GRDC and SAGIT and is being extended to the other States. One of SAGITs most popular publications

Much of the success of SAGIT is due to the skill and efforts of its founders and those who have followed. 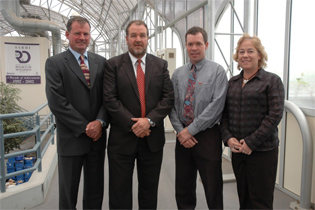 Communication is essential to any program both to inform farmers as to what you are doing and to get their ideas as to what further work is required. SAGIT has always been fortunate in being relatively small and close to its farmer stakeholders

Its communication efforts have been largely through:

SA has for many years "punched above its weight" in terms of national influence in the grains industry, be it agro political or in R&D.

This has included lead roles in such things as the Grains Council of Australia and the various research committees.

Until recently SAGIT has concentrated almost solely on its primary purpose of funding and managing R, D & E for the benefit of SA growers.

There have however emerged a number of issues which impinge directly on research, development and extension and it’s funding to which SAGIT has and will continue to respond.

It is anticipated that the need to address these broader issues will increase in future.

Few would question the success of SAGIT over the past twenty years, but what of the future?

It is likely that SAGIT will be driven by a number of factors:

Given its history and performance to date, and with the support of farmers and their communities, there is every reason to expect that SAGIT will meet these challenges and continue to play a vital role in the development and success of the grains industry in South Australia.